By David Jensen January 03, 2014
If you're a woman of a certain age you've probably been to at least one Stella & Dot party in the past year. They're like the Tupperware of jewlery--you can only buy their stuff through one of their representatives, or "stylists," as they are known. I got invited to a party at my sister's a couple of months ago and also hosted a party of my own and have come away with a newfound appreciation for their sophisticated branding efforts.

I first became aware of Stella & Dot maybe 5-6 years ago when I was invited to a party by a friend. At the time I thought their stuff was "cute" but it seems they've come quite a long way since that time I bought a shamrock charm on a silk cord. They'd expanded their line and now sell bags, wallets, scarves and other accessories in addition to the jewelry, the selection of which also seems to have greatly increased.

I was first very impressed with their printed catalog: it's beautifully photographed and designed, as you can see in the example spread below: 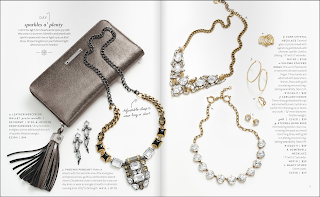 Their website is also very nicely done, perfectly coordinated with their printed materials, all conveying a sense of effortless sophisticated elegance that's also down-to-earth. It's aspirational and attainable at the same time, which is no mean feat. Here's a screencap of their website: 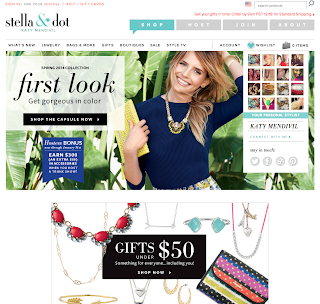 It's only after I'd gotten my first shipment from them that I realized just how much thought and effort they'd put into a seamless branding experience. Even though the package you get is a standard plain brown cardboard box, when you open it, a little Stella & Dot world pops out, down to their very own specially branded puffy space fillers:

I'm sure most of their customers just have a nice experience interacting with their materials without really analyzing WHY they're having a nice experience, but as a design professional, noticing stuff like this is an occupational hazard. I was truly impressed and a little jealous that somebody got to work on this project, lol. I personally love all the stuff I've gotten from them, but a part of that is from knowing that I'm dealing with a company who understands the value of a powerful and consistent brand that is also beautifully designed. If they pay half as much attention to their actual product, it's probably pretty darn good. And even though it's not really their business model, with some successful online-only brands venturing into brick-and-mortar spaces (such as Warby Parker), I can easily imagine how well the Stella & Dot brand could extend into physical stores.

Stephanie is a Senior Art Director at JDA Inc, a graphic design firm that specializes in supporting companies' branding and retail efforts with a Unified Marketing approach. To learn more, click here.

By David Jensen October 29, 2008
1. Prioritize. Prioritize. Prioritize. When three people are talking to you, you can’t hear them all. The same is true for design. Visual priority must be established from the very beginning of the design process. If every item is given primary importance, nothing becomes important. The visual priorities are what drive how all creative will be judged. The design firm should include as part of their creative brief, a hierarchy of 5 communication points for the front of the package. This includes 1) brand 2) product name 3) why-to-buy statement 4) feature points 5) product image.

2. Come together. Everyone has an opinion, so clear project objectives are vital to any job. Consensus regarding the creative brief must be obtained from the people expected to judge the package design from within your corporation. Without this consensus, the design process will fall apart. Without clearly stated, agreed-upon objectives, you are not able to provide constructive feedback. As soon as you start to …
1 comment
Read more

Looking back: What I learned from the the Pepsi, Starbucks and Tropicana redesigns.

By David Jensen March 19, 2013
3 years ago, Pepsi redesigned their logo. Most everyone hated it. That same year Tropicana redesigned their orange juice packaging. Most everyone hated it as well. Not long after, Starbucks simplified their logo much to the dismay of those that thought it was unnecessary. Like they say— time heals all wounds, and as "hurt" as we were by the tweaking of our beloved brands, I have gathered my thoughts and compared what I thought then versus what I think now…

When the Pepsi redesign materialized, the office was abuzz. Especially because accompanying it was a ridiculous 30-page design strategy that compared Pepsi to the center of the universe and pointed out past and present Pepsi logos' geometric qualities. There were comparisons to the Mona Lisa, Vitruvian Man, and even a section about Pepsi's "gravitational pull" and it's relation to the speed of light. WTH?! The most useful thing to come out of the design strategy was a design study of varying smiles an…
1 comment
Read more

By David Jensen June 09, 2015
Cal State Long Beach recently held their Graphic Design Senior Show for this year's graduating class. In traditional fashion, this is an opportunity for graduating students to show off their creative work accomplished during their 2 years in CSULB's always strong Visual Communications program.

This year's class titled their show "For the Love of it," and clearly showcased all the love and hard work that went into making it a success. A notable aspect of the show was how the class divided up the work between 4 different galleries.

The main gallery was where all the students' individual work was displayed. If you want to stand out to potential employers, this is where you do it.


The second gallery was where they displayed team projects and other collaborative efforts. From what I've heard about the design program over the years, they've really bumped up their efforts in showcasing how well CSULB designers work well together whether it's in small tea…
Post a Comment
Read more