I'm Ready for the Robocalypse...if They'll Clean Up My Cats' Poop

By Steph Han April 28, 2017
I first saw the Litter Robot at CatCon LA last year, browsing through the aisles of every kind of products for cats imaginable, including a lot of tech items. It's sort of the Rolls Royce of automatic cat litter boxes, with a price tag to match ($450, but hey free shipping!). My boyfriend and I joked that this would be one of the first things we'd get when we moved in together, since between the two of us there would be three cats and we could just imagine what the litter box scooping situation would look like. Fast forward a year later, and we decided to take the Litter Robot plunge! We read up on all the reviews, of course, and when I saw that it was one of Styletails.com's picks for best of pet tech from CES 2017, it sealed the deal.

When it got delivered to my office about a week after placing the order, I was pretty impressed with the package design; they do a lot with just black ink on corrugate cardboard. It's cost-effective but still impactful: simple, clean, and just informative enough. I don't think these are available at most retail outlets like PetSmart or whatever, which probably means their packaging doesn't have to compete with other typical retail products, so they can afford to keep it simple. 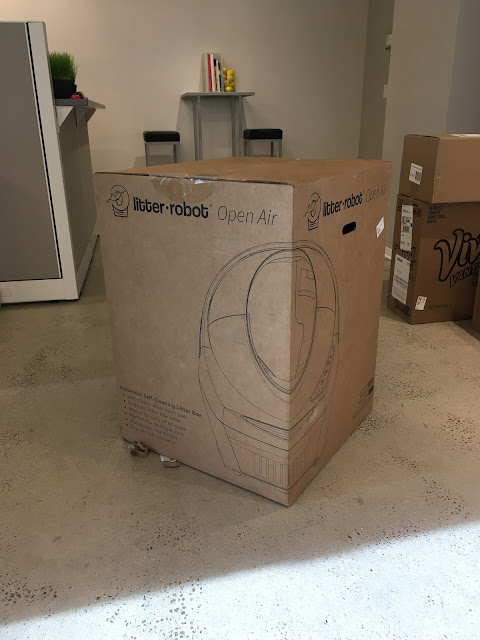 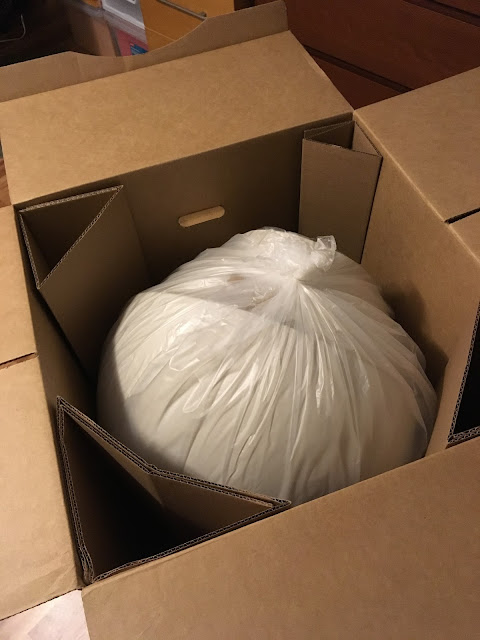 When I got the product home and opened the box, I was glad to see that it came fully assembled. I just had to take it out of the box, plug in the power source, fill it with litter and it was ready to go. 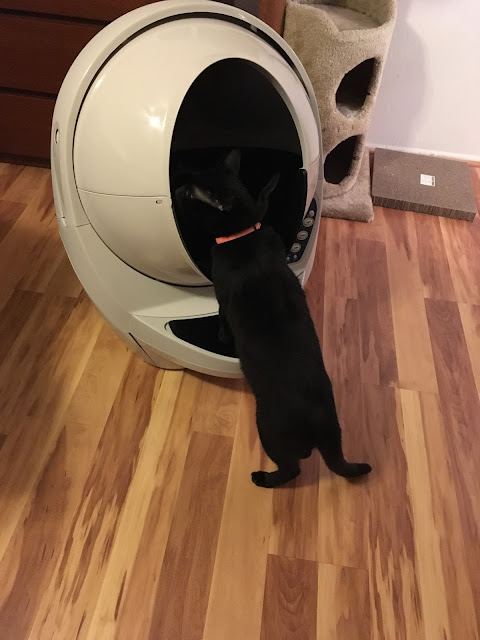 Somebody is already curious! 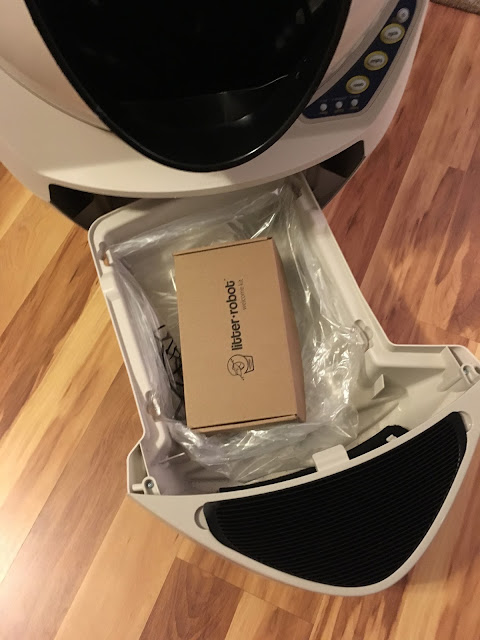 In the collection drawer was their Welcome Kit, with all the documentation, power adapter, extra liner bags, etc. 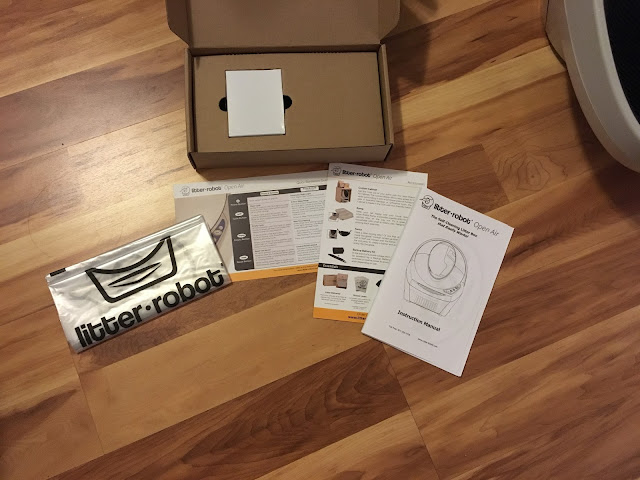 They did a great job with establishing their branding and following it through on all their materials, from web site, to package to documentation. 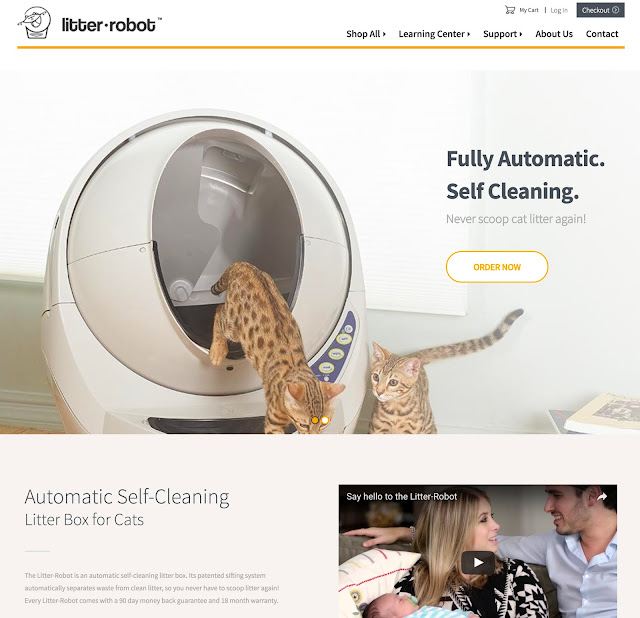 It's been about five days now and both of my cats are actively using it with no problems, yay! Litter Robot provides helpful transition tips and thankfully they worked for my cats. The basics are: put it as close to where their old box was as possible, stop cleaning their old box, and don't have the sensor mode on (just manually push the cleaning button) until the cats are used to the sounds and movement of the Litter Robot. Worked like a charm; my scoop-free future is now! 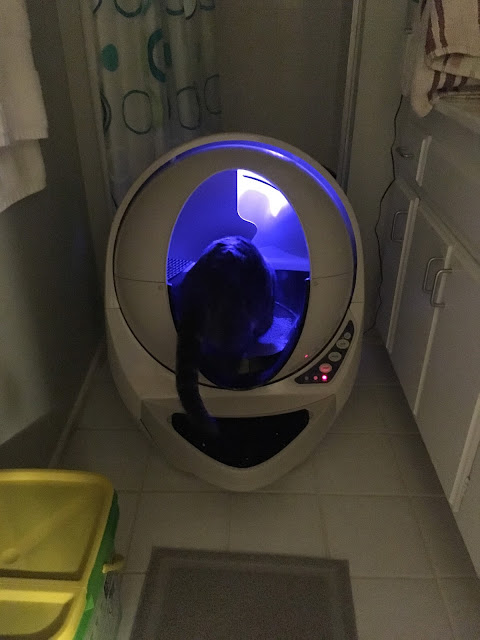 So futuristic with its cool blue night light on!

By David Jensen October 29, 2008
1. Prioritize. Prioritize. Prioritize. When three people are talking to you, you can’t hear them all. The same is true for design. Visual priority must be established from the very beginning of the design process. If every item is given primary importance, nothing becomes important. The visual priorities are what drive how all creative will be judged. The design firm should include as part of their creative brief, a hierarchy of 5 communication points for the front of the package. This includes 1) brand 2) product name 3) why-to-buy statement 4) feature points 5) product image. 2. Come together. Everyone has an opinion, so clear project objectives are vital to any job. Consensus regarding the creative brief must be obtained from the people expected to judge the package design from within your corporation. Without this consensus, the design process will fall apart. Without clearly stated, agreed-upon objectives, you are not able to provide constructive feedback. As soon as you start
1 comment
Read more

By JDA, Inc. July 28, 2014
I was in Macy’s several months back and the "Ice-Watch" display and packaging made it impossible to walk by without checking them out. I had never heard about Ice-Watch before this day. At first it was the color overload that stood out from the conservative jewelry counters. Then I began to look at the form factor which looked like LEGO cubed jewel cases. It was a fun and playful way to get some attention. Then I looked at the watches which were fairly modern and familiar looking. It could have been one of the hundreds of other analog watches in the glass case but the difference was that it was a ridiculously bright color. Having to design packaging form factors in the past, I’m always interested in seeing how designers and engineers put things together. There’s considerations of retail impact, packaging form factor, pegged or stacked, etc. Well, these definitely had the visual impact AND they stacked like LEGOs, too. You ok with that, LEGO?!
Post a Comment
Read more